Behind-the-Scares of the Chainsaw Drill Team

Katie Schmidt, the Managing Editor over at Universal Orlando Resort Blog gave us some inside details about all things Chainsaw Drill Team, and its pretty awesome. Take a look.

KATIE: Thanks for agreeing to do this! I don’t have any firsthand experience with the Chainsaw Drill Team, but I have been doing some research for our conversation.

KATIE: Well, I gotta say, I felt a little scared just preparing questions for you for today! But, let’s get into it. Let’s talk Chainsaw Drill Team.

LORA: The Chainsaw Drill Team has really been a part of the event since the beginning and it’s had so many iterations. And honestly, it wouldn’t be Halloween Horror Nights if you didn’t hear chainsaws.

KATIE: Why do you think that is?

LORA: I think it’s the sound. It’s the startle, it’s the fact that people can’t believe we put chainsaws in people’s hands.

KATIE: What’s the origin, or history, behind the Chainsaw Drill Team?

LORA: I think in the beginning it was kind of a more militant group that marched around the park and did drills. And then for many years it was more of a backwards kind of troupe of rough and tumble guys with flannel shirts and cuts and slashes. Those two versions were really the start. 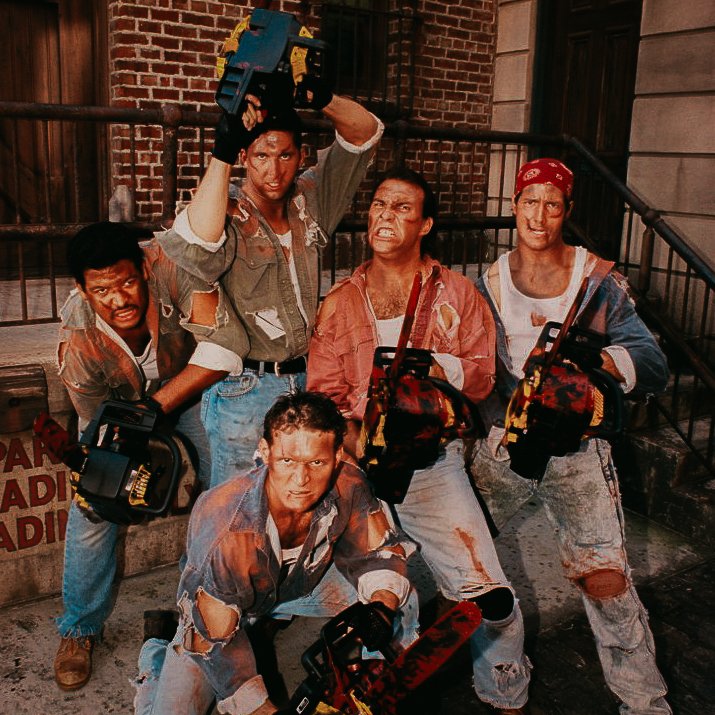 KATIE: So these are essentially just a group of deranged people with chainsaws?

LORA: Yeah I’d say in every iteration of the team, they’re all deranged. You’ve had deranged comic clowns, deranged prisoners, deranged geishas, deranged cheerleaders, deranged butchers…it’s been so many different iterations. They’ve been a part of a couple main scare zones in the past. One was called Lights, Camera, Hacktion in 2009. It was a movie about the Chainsaw Drill Team, but they “hired” the real team and the “hacktion” insued. So it was a lot of fake bodies laying all over the production and the whole team chasing down all kinds of production people with saws, it was fun.

KATIE: Fun is an interesting word to use there!

LORA: You don’t get to say these things in every job!! It’s definitely fun. I think it was Halloween 22 that we had roaming hordes. That was the first year we had a completely female Chainsaw Drill Team.

KATIE: Yes! What was the theme for them?

LORA: It was Carey’s Women’s Correctional Facility (CWCF) prisoners. An all-female facility full of inmates who escaped and wreaked havoc. Since then we’ve had a few all-female teams, including cheerleaders one year. 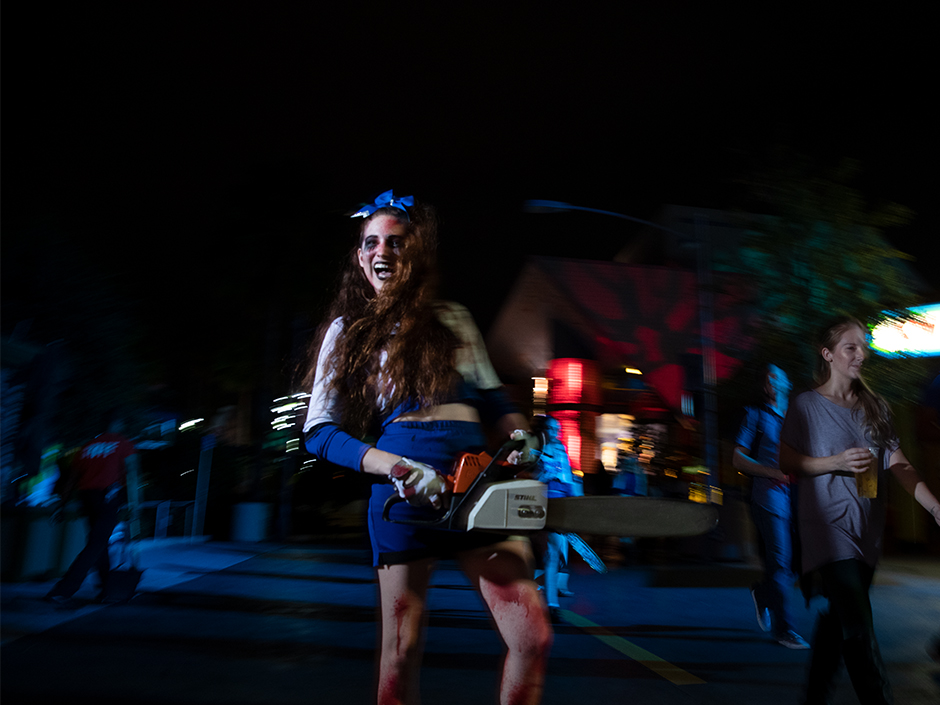 KATIE: Do you have a favorite one?

LORA: The all-female prisoners cast. That was just a proud moment as the female who works on Halloween.

KATIE: Are the scare-actors coming up with their own backstories or do you guys provide them?

LORA: We always come up with the character tropes for the group and then a loose identity for each character. But I will say, you see a lot of the same people on the Chainsaw Drill Team because they’re just so good at the scare that every year they take that character we give them and expand upon it themselves. They come up with these amazing, huge backstories that most people won’t ever know, but it helps them be motivated and work with each other. I think one of the biggest things for the Chainsaw Drill Team is working together as a team, because the distraction is so important to the chainsaw scares. One of the greatest scares is using a chainsaw to distract. So you’re walking forward and you see a guy or girl looming in front of you with the saw, staring you down and you think they’re going to come after you. But what they’re doing is setting up this beautiful distraction for a saw to rev up behind you and you had no idea it was there.

KATIE: So you’re saying someone could think they’ve escaped unscathed, but a Chainsaw Drill Team member has an eye on them for later?

LORA: You remember people because people tend to make a loop around the park. You remember what they have on, if they scared really well, if you didn’t get them the last time. So you go back after them. The scareactors like the screamers. It’s their job to get a startle out of someone.

The scareactors like the screamers. It’s their job to get a startle out of someone.

KATIE: OK, so there’s a level of strategy involved here.

LORA: Yes. We have a great direction team, we have show directors, assistant show directors, performance coordinators, that are out there helping them and teaching them the best way to scare. Within a haunted house, we call it a book show because the scares are written. You are going to be distracted every time and you are going to be startled because each room is its own little script. But in the scare zones, it’s more of an improv show. There are so many things that can happen out there.

KATIE: What makes a great scareactor for the Chainsaw Drill Team?

LORA: They have to know how to use their saw. The best are the ones who know they don’t have to “rev” their saw all the time. The best of the best can get a startle just raising the saw above their head, not even turning it on. I mean the scareactor is really the backbone of Halloween Horror Nights.

LORA: If we didn’t have scareactors, there would be no Halloween Horror Nights. As much as our scenic is so impeccable and beautiful and film-quality, you have to have that human movement and that human interaction to really give you the startle.

KATIE: It is kind of crazy that that’s someone’s job, to scare people.

LORA: I love standing near scare zones or outside of the exits of houses. You see people just running and screaming and it makes you very proud of what you do. The screams are the applause, and we like to get those screams.

Have you been to Halloween Horror Nights before? Let us know in the comments below!