Two years before the orange doors of Weasleys’ Wizard Wheezes officially opened in The Wizarding World of Harry Potter – Diagon Alley at Universal Studios Florida, Maria Kazaros and her team were already hard at work to bring novelty jokes and pranks inspired by those of Fred and George Weasley to life.

“One of the hardest parts in the beginning was just, how do you bring things to life from Harry’s world,” Maria explains. “We spent many months watching the movies, reading the books, brainstorming, doing work sessions. And we brought in some of the fans to see what they liked. Those fans care and they know what they want, so that helped us all in figuring out what the merchandise in The Wizarding World of Harry Potter would be.” 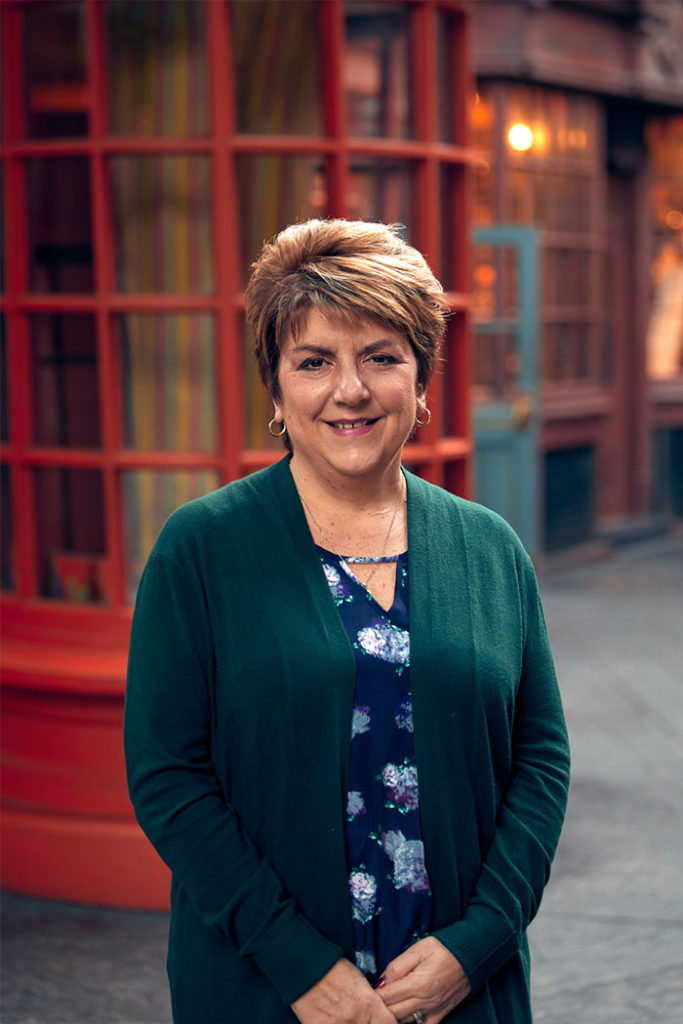 Of course, while the source material for the Wizarding World (as seen in the Harry Potter film series) is plentiful and rich in detail, it can be tricky taking something you see in a movie and figuring out how to make it into an operational toy.

“One thing that I do is I rely on my product partners who are experts in the industry and know how toys can go from nothing to something,” Maria says. “I ask a lot of questions or just come to them and say, ‘I want to make this, can I?’ And then we’ll sort of reengineer it and I get to create my vision, so to speak.” 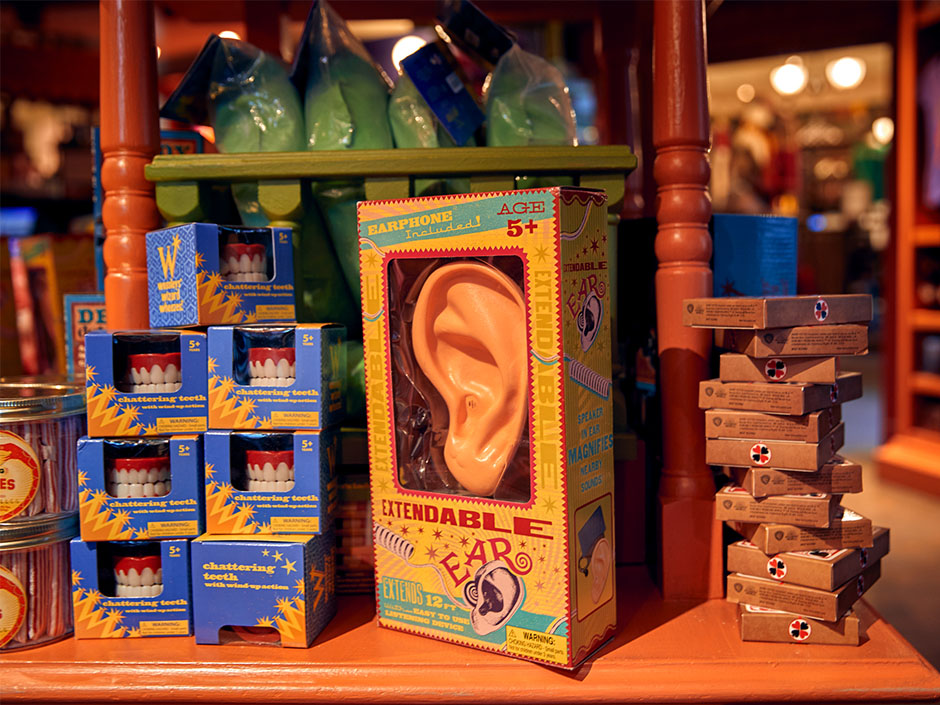 Maria has been with the company since 1999, starting out as a store manager in a handful of merchandise locations until joining the merchandise development team in 2001. Maria says she enjoys working with toys because it allows her to be a problem-solver.

Walking through Weasleys’ Wizard Wheezes, there is a lot to interact with. From the toilet-in-the-front-window flushing at the flick of your interactive wand, to all the Extendable Ears and Skiving Snackboxes your heart desires, the entire shop is packed to the ceiling (which, be sure to look up at for a surprise) with Weasleys-inspired items and tie-ins to the movies. 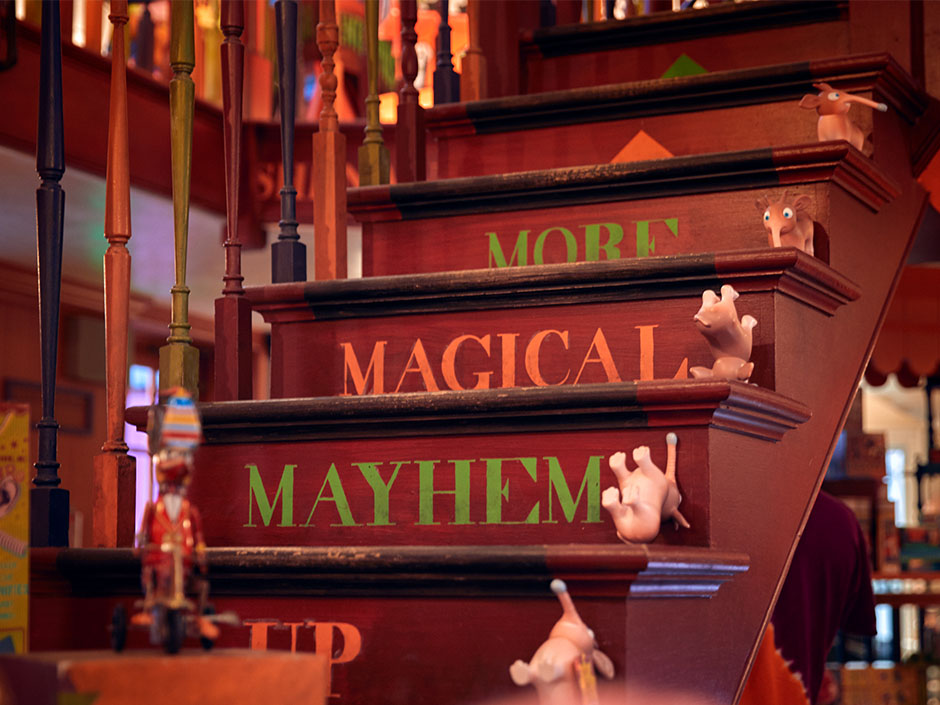 “I still watch the movies over and over because there’s so much that you can still catch from them that you haven’t seen,” Maria says.

To be honest, I also watch the Harry Potter movies over and over, so what’s the difference when Maria does? When I watch a scene with the Marauder’s Map, I am simply enjoying the magic of it all. Maria on the other hand…

“The Marauder’s Map was a fun one to figure out,” Maria says. “You hit it with the wand and the footprints go around, just like in the movies.”

One of Maria’s top priorities when developing merchandise for The Wizarding World of Harry Potter is ensuring everything feels authentic — taking the notch up on what people expect from an everyday toy. And as for the merchandise in Weasleys’ Wizard Wheezes, there is a unique chaos she aims to capture.

“When you think of that scene in the movie, everything is moving. Dolores Umbridge on the unicycle moves in their store and moves in ours. So that’s one we actually created and brought to life from the movies.” 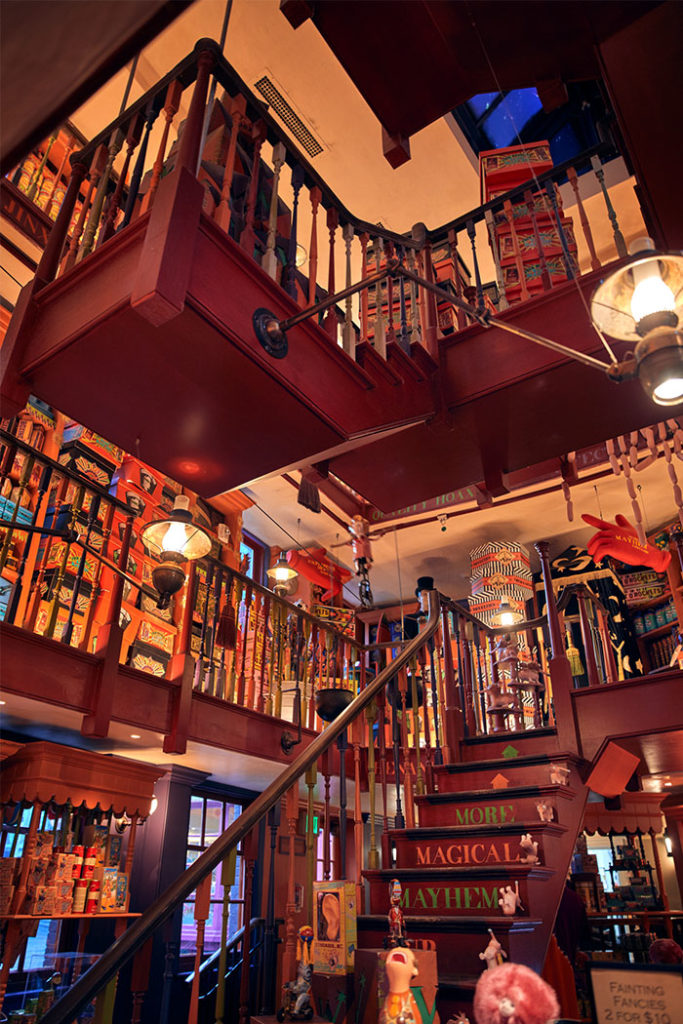 What’s your favorite piece of Wizarding World merchandise? Let us know in the comments!

Thinking about your next adventure? There are fantastic 2020 Universal Studios bargains to be had and 2021 packages will be available in just a few short months! Fill out our form below to get your FREE, no-obligation quote from Let’s Adventure Travel!